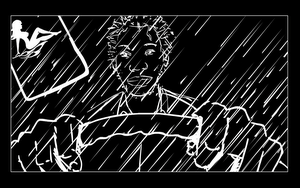 With influences ranging from grunge to 70's soul, DC native Taiwo Heard brings a refeshing electro vibe to the LA indie rock scene- strongly melody driven and characterized by poignant lyrics. His dynamic repertoire suggest elements of My Morning Jacket, Arcade fire and David Bowie. Taiwo Heard began teaching himself piano at age 6 after listening in on his older brother's piano lessons. His mother took notice and promptly enrolled him in classes at a local music school. During his junior year of high school, Taiwo joined his first band "Masterpiece" as a keyboardist and began to write. Competition with the lead singer was fierce, but it fueled Taiwo's desire to expand his musical horizons. It was this catalyst that led to his becoming a vocalist- and the reason that he began to seriously play the guitar. After moving to Boston, Heard attended the Berklee College of Music, majoring in Music Synthesis with a emphasis on voice. It was during this period that he began listening to electronic music such as Aphex Twin and Bjork, while also gaining a greater appreciation for such electronic music pioneers as The Residents, Stevie Wonder, and Leon Theremin. After graduating Berklee and moving to Los Angeles in 2005, Taiwo reconnected with long time friend and collaborator Eddie Robinson to form the electropop group "Swivel". He recorded and co-produced Swivel's first album "Landing" which led to numerous domestic and international festival tour dates- and a nationally televised music video. A year after Swivel disbanded, Taiwo joined LA indie rock band Surface To Air as both guitarist and lead singer. The trio performed extensively at famed Sunset Strip venues like the Viper Room, the Rainbow Room, and the House of Blues. Taiwo Heard's debut solo album "Frontier To Eternity," released in spring of 2013, continues to receive a warm reception from fans and press alike. With more shows and two new videos in the works, Heard is taking the underground indie music world by storm.