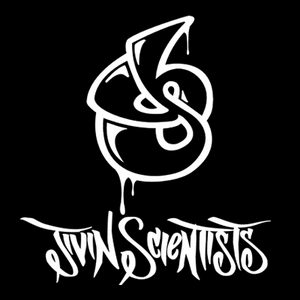 Jivin Scientists is a Tucson, Arizona based Hip-Hop group centered around James Owens, aka MC Runt, and producer and beatsmith Ryan Troncoso, aka Phen. Formed in 1998, The Jivin Scientists started off as a collective of MCs, graffiti writers, b-boys and party DJs. In 2000, Runt’s older brother, Jason Owens aka DJ Deeko moved to Tucson and began playing in the Hip-Hop scene. In 2001, Runt and Phen along with Dj Deeko and Chase Crusher finished their debut album entitled “Good For Nothing.” Runt and Phen, then only seniors in high school, passed out over 2,000 copies of the album all over New Mexico and Arizona. In the summer of 2002, The Jivin Scientists released their second album entitled “Paragraph.” Produced entirely by Phen, the album set the stage for the group to play live shows. After circulating over 5,000 copies, the album led the group to open up for major acts traveling through Tucson, such as Atmosphere, Murs, 2mex, J Live and many more. In 2004, Phen, then living in Albuquerque, moved to Tucson and began work on the Jivin Scientists’ third album entitled “Average Joe.” The album, produced by Chase Crusher and engineered by Phen, became the first album sold by the group. The Jivin Scientists then set out on the road, touring for short stints and playing shows all over the Southwest, and the group began developing a fanbase all over. In 2006, the group released their fourth album entitled “Monsters.” Produced entirely by Phen, the album became a calling card to the Jivin Scientists sound- dark and intensely honest music that tugged at the heart of the listener. Playing shows and touring over the next two years, the Jivin Scientists came in contact with another up and coming group the 8bit Cynics and in 2008 the two teamed up and released a collaboration album entitled “Self Help.” Runt and Dewy Binns of 8bit recorded the album in a matter of three days and followed with a 26-city tour in the summer of 2008. Selling over a 1,000 hardcopies and countless digital sales, the album spread the name of the Jivin Scientists from coast to coast. In 2009, Runt and Deeko moved to Oklahoma. During that time, Runt linked up with Tucson producer Defacedproperty and began work on the group’s sixth album entitled “Autumn.” This release led them to the road once more, and in the summer of 2010 Runt moved back to Tucson. Currently Runt and Phen are busy recording and playing live shows while preparing for their seventh album, “The Morning After.”