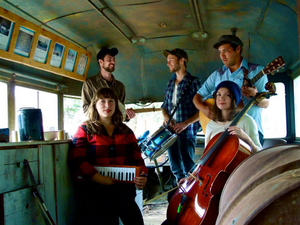 Feeding Frenzy is a five-member folk outfit from Fairbanks, Alaska. The band is an exercise in polarity - soft melodies and singer/songwriter influenced songs meet high-energy melodious sing-alongs throughout their set. The band, which formed in early 2010, has opened for mewithoutYou, Murder By Death, Netherfriends, Builders and the Butchers, and during SXSW 2011 made The Atlantic, Paste Magazine, and various other blogs. Feeding Frenzy's album, "Positive Vandalism", has been a feature on the stations playlist, and the band has performed live on the air in the past and will appear in an episode of KSUA Take Out in early April. www.facebook.com/feedingfrenzyak feedingfrenzy.bandcamp.com