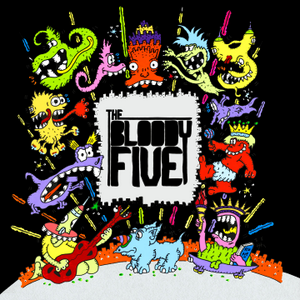 Formed in 2009, The Bloody Five are 70’s 80’s and 90’s babies with a mutual passion for creating music and building on each other’s imagination. The band’s multi-generational make-up and fusion of relative influences drive their mission to brew a magical mystery potion for the ears. Guitarist, Tomi Fear and Vocalist, KD were inspired to write tunes while jamming in Claremont, Ontario with “The Vinyl Knights”, a blues brotherhood . Jay Appleby replaced Chris Hau on bass perpetuating the raw energy for which the band is known. Robby “Raw Beats” Sedran rounds out the band with his uncanny ability to define the groove using innovative fills and his double bass pedal. He speaks softly but carries powerful sticks. In 2010, The Bloody Five released their first EP, Bedroom Music, produced by Derek Hoffman (Brighter Brightest- Much Discovered), which was well received by fans and given positive reviews. The band worked hard to manage and promote itself and collaborate with different people also yearning to express their artistic passion in different ways. In 2011, the band once more teamed up with Derek Hoffman to produce a full length album. They were also fortunate to receive studio support from Brian Moncarz (The Darcys) and Joao Carvalho (Sloan). Meanwhile, the band continued touring around southern Ontario with showcases at Canadian Music Week, North by North East, Indie Week, and the Y108 Spring Music Festival. In October 2011, Track 10–Never Again was included in the Rock Band 3 video game. Early in 2012 with the support of Autoshare, The Bloody Five released an album single, their rendition of The Demics classic, (I Wanna Go To) New York City. The song garnered attention on Y108 (Hamilton), AlanCross.ca, PunkNews.org, FM96 (London), MuchMusic (including a profile on MuchMore’s Matt Tracks), and AUXTV. The momentum continued to rise as the song and its unique video have been praised by music journalists and placed on rotation on several college radio stations throughout Canada, even charting on Mohawk College’s INDI101. Songs from the album were given pre-release commercial airplay when The Bloody Five were the featured Band of the Month on FM96 (London), Y108 (Hamilton) and 102.1 The Edge (Toronto). August, 2012 marked the release of the band’s first full length album, “Unreleased 2012? which features the album cover artwork of RUNT, the artist who paints the mural on the front wall of Lee’s Palace, Toronto. The album is now available on iTunes and select CD stores in the Toronto area. It has continued to make an impact on college radio stations throughout Canada, even charting on Mohawk College’s INDI101 and Brock University’s CFBU-FM. In October 2012, songs from the album were featured on 94.9 The Rock (Oshawa) Indie at 8. Already garnering overwhelmingly positive attention from longtime fans and critics alike, the album marks a new chapter as the band makes their impact felt on the global rock scene. January 2014 sees The Bloody Five release their second official single, Je M’excuse. The boys will be stepping back into the studio with new material coming soon.