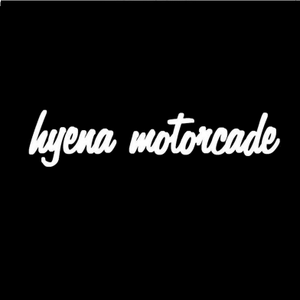 Hyena Motorcade was formed in Orange County, CA during the summer of 2009 by Rick Kaley and Mark Allen with bassist Art Agunod joining Rick and Mark shortly afterwards when the Mixed Martial Arts media group MMA Worldwide/TapouT Magazine where Mark worked was about to wrap filming on their weekly series set to be aired on HDNet. The show's Executive Director and Cannes Film Festival Award winner James Hergott approached Mark in regards to placing the band in the show's soundtrack after hearing a rough guitar demo of what was later to be the song "Shadows". James then asked the band if he could get the song recorded within two weeks in order to make his production deadlines and include it into the TV show's soundtrack, so Mark, Ric, Art and guest drummer James English went straight into Sound Asylum Studios in Santa Ana, CA to record the track. The song was included into six of the seasons ten episodes during the 2009 season and the positive attention the song and band received both from the TV show as well as receiving airplay on terrestrial and internet stations was enough to warrant the band continuing to write more material and to solidify the band lineup for potential live shows. Within a few months, the band brought bassist Art Agunod's brother aboard on drums and the group once again entered the studio, this time opting for Satellite Park Studios in Malibu, CA to record their debut three song demo under the guidance of the legendary Paul Roessler whos credits include The Screamers, Twisted Roots, 45 Grave, Dead Kennedys, Nervous Gender, SAUPG, Geza X and the Mommymen, Mike Watt and the Secondmen, Nina Hagen and The Deadbeats and many other seminal punk and rock bands. The new recordings featured two originals (Into The Static and Snowflakes) along with a cover of The Plugz song "Achin'". This new three song EP received many accolades and once again was garnering quite a bit of airplay on college and internet radio. For the first time, the band had introduced the saxophone into their music in the smoky, blues driven song Snowflakes and showed the band to be diverse and able to float between genres with ease, but all the while not compromising their core sound. In 2013 the band brought aboard drummer Alberto Campos who played drums on the band's newest self-titled 4-song EP and are now in the process of writing new material that will eventually be compiled for their debut full-length album which they hope to have completed and released in the Summer of 2014. The band has just released it's self-titled EP CD and have opened for and played with such iconic acts as The Fixx, Bow Wow Wow and Modern English to name but a few. The band is set to open for Missing Persons at the Saint Rocke in Hermosa Beach on 1-10-14 and Kid Congo Powers (Gun Club, Cramps, Nick Cave, The Fall) on 2-12-14 at the Slidebar in Fullerton along with starting a bi-weekly residency at a venue in Long Beach. Hyena Motorcade CDs and downloads are available on CDBaby, iTunes, Tunecore and other popular online retail outlets www.reverbnation.com/hyenamotorcade www.soundcloud.com/hyena-motorcade www.cdbaby.com/cd/hyenamotorcade www.twitter.com/hyenamotorcade www.facebook.com/hyenamotorcade