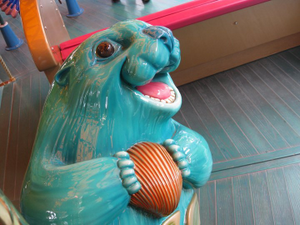 Faces of Radio was a variety show featured on KCTYfm from 2012 to 2014. It aired for 5 seasons winning the Radio Star Award in Fall of 2013 for best variety show as well as assisting in KCTY's ascertaining of Station of the Year. The show was Hosted by Derek, Your Radio Face and Blondie. It boasted being the home to the most eclectic music playlists around. From Alt. Rock to Dubstep, Metal to Reggae... the music was kept (mainly) underground and ever changing. The show covered a variety of topics. You never knew what would be brought up next. Along with total randomness and special guest hosts, there were several segments done such as Would You Rather?, insane news stories, and Ain't Nobody Got Time for That! In the fourth and fifth seasons,Derek and Blondie were able to travel to several different parts off the country for live broadcasts including Oktoberfest, Mardi Gras, and Spring Break. The show ended with Derek's departure of KCTY